skip to main | skip to sidebar

is it possible to have what looks like a perfectly wonderful room.. make a mess of it.. then bring it back to an even better existence? of course it is...and we're well on our way of doing it!

photo..before we bought this house..a big selling point was this room. right off the kitchen and open to back yard with windows enclosing the room and sunlight streaming in. I immediately had the vision of taking the sliding doors off and opening up this wonderful space as a small family room 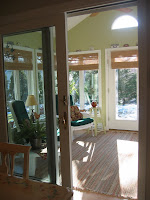 photo..after moving and settling in as a warm cozy family room.. wrong!
the windows were tight but i included thermal drapes for the winter months..the look was right and my vision was starting to come together...but..warm it was NOT! 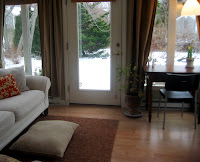 photo during...the previous owners had put electric heat in this room but had never insulated the floor, which by the way, when we took it up found it was also just sitting on the deck. yup..pergo floor sitting on deck and nothing but earth! 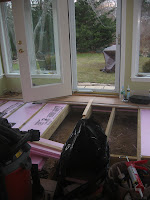 photo during...construction..strike that...destruction! pergo floor removed (carefully)..decking cut (carefully)...layers of foam insulation board installed between the rafters..deck boards screwed back on. note on this part..the deck is very close to ground, which meant no way to work from below..it was done from above, using mirrors when needed to see under the boards that were left in place. not any easy task according to the curses I heard during this part. 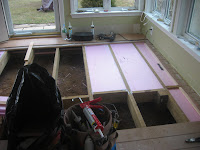 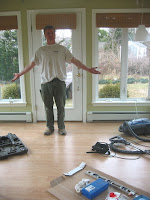 photo during..electric heat was removed, piping for gas heat from main house is being installed. these pipes are being boxed in as we speak. 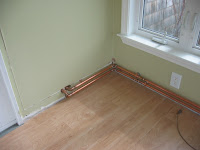 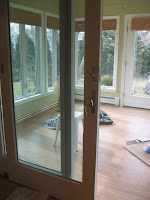 photo during...the opening, which is 6 feet wide of sunlight streaming in, also has a step down...the adjoining floors are maple hardwood in the kitchen and pergo maple in the sunroom.
a maple step is being made and installed 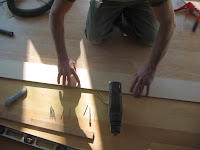 photos during...looking in sunroom from kitchen
a few peeks at the progress so far...just peeks now..we don't want to spoil the ending! 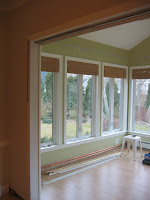 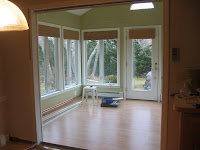 I just could not wait to share this project with everyone. It's one I've been waiting impatiently to do...progress updates are promised!

Have a wonderful weekend everyone...I'll be filling in nail holes and painting!

Posted by solsticehome at 10:15 AM

The sea is my passion (too) and my husband and I just remodeled our home here in coastal Rhode Island... (right across the border of MA), so I know what it takes. Awesome improvements!

Wow, you are good remodelers!

You're going to have so much fun with this beautiful new sun room!

Thank you so much for your kind words on my blog today. Your space is coming along nicely. How exciting!

Your room looks great. You did a wonderful job. I've always wanted a sun room. thanks for sharing

Wow! I can so relate to this tale of dreaming about how a particular room will feel and come to find out, it isn't quite the way you imagined! Great job solving its issues! No point in having a beautiful room that it too cold to be in :-) 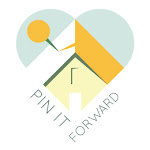 Thank you all so much for the votes!

find me here this month